A Visit To Gettysburg

My husband, Hal, and I wanted to take our grandkids, Janie and Jake, 12 and 14, on a summer getaway, but with everyone’s busy schedules, the best we could do was a weekend in Gettysburg—and despite the fact a friend told Janie that a trip with her grandparents sounded pretty lame, we all had a great time.

My husband, Hal, and I wanted to take our grandkids, Janie and Jake, 12 and 14, on a summer getaway, but with everyone’s busy schedules, the best we could do was a weekend in Gettysburg—and despite the fact a friend told Janie that a trip with her grandparents sounded pretty lame, we all had a great time. The kids had studied the Civil War and were game for anything, as long as their phones could come, too.

Gettysburg is an easy 3 ½-hour drive from Pittsburgh, just long enough for the kids to fall asleep listening to their favorite music with earbuds, while we sang along to the Beatles, the Eagles, Carly Simon and Lady Antebellum blasting from my phone. Turnpike scenery, we had all seen before.

I had considered booking authentic Civil War era rooms at the Fairfield Inn, where I had stayed years ago, or another quaint historic place. But I wisely opted instead for the modern Wyndham Gettysburg a few miles outside the town ($129). After a Friday tour of downtown, the kids enjoyed the hotel’s indoor pool and workout facility while we relaxed. And instead of having dinner in town at the Parrot, a top restaurant I had reserved on Open Table, we cancelled and opted for burgers in the hotel’s cozy pub. We purchased tickets online from the National Park Service for Saturday’s activities, then went early to bed, so we’d be ready for the big day. 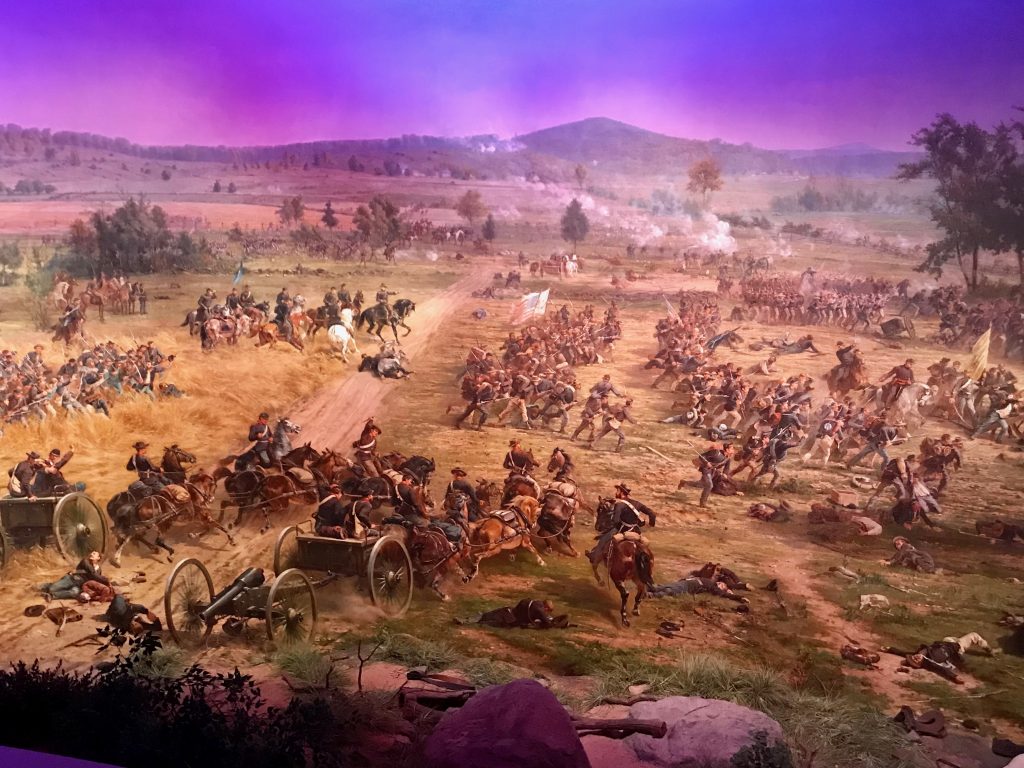 We awoke Saturday to clouds that eventually burst and dropped hard steady rain all day. But it didn’t spoil our trip. We got to the Gettysburg National Park Visitor Center and Museum before the deluge, where we snagged a reservation for that afternoon’s last private two-hour tour of the battlefield—a bargain, we thought, at $75 for four people. Three hours was plenty of time to see the museum, watch the documentary film and see the famous Cyclorama. The film, narrated by Morgan Freeman, was compelling. The thing the kids wanted to see most—the Emancipation Proclamation signed by Lincoln—turned out to be small and a bit disappointing. But we all were blown away by the Cyclorama—the massive circular “3D” oil painting that depicts the Confederacy’s three-day assault with narration, dramatic lighting and the boom of cannons. Painted in 1883 and on display in Gettysburg since 1913, the Cyclorama was completely rehabilitated and placed in its own unique viewing auditorium when the visitor center opened in 2008.

Standing on the platform that surrounds it, you feel like you’re in the middle of the battle. (If you saw it years ago, see it again.)

At 1 p.m., we met our battlefield guide, a middle school history teacher on summer break, who drove us around the battlefield in our own car and taught us more about the Civil War than we ever learned in school. (You can take a self-guided car tour or bus tour, if you prefer). Our favorite part was seeing—well, actually standing upon—Little Round Top, because we have an oil painting of it in our home and had no idea of its significance. We also liked the Eternal Light Peace Memorial, which our guide said inspired Jacqueline Kennedy to request the eternal flame on JFK’s grave. We hopped into the rain a few times to snap photos, but we probably saw more because we didn’t get out often. We tipped the guide $20; he was well worth it.

That evening, we decided to dine at the period Farnsworth House. When we arrived, it turned out to be touristy, with a long wait, a big gift shop, costumed waitresses and a menu starring the likes of chicken pot pie. Instead, we opted for One Lincoln, which got rave reviews on Open Table for its modern American cuisine. We shared the short rib flatbread appetizer and three of us loved our entrees (all under $30). Chicken penne pasta for Janie, shrimp and grits for me and crab stuffed scallops for our gourmet, Jake. (Thumbs down for Hal’s Reuben—save that for NYC’s Carnegie Deli.)

On Sunday morning, the sun came out and we headed early to Soldiers National Cemetery, highly recommended by the previous day’s guide. Fifty-one thousand men (and 5,000 horses) died at Gettysburg, considered to be the turning point of the war. Because of the July heat, the soldiers were buried en masse quickly in shallow graves, a situation that so distressed Pennsylvania’s governor that he quickly commissioned the purchase of 17 acres for the proper burial of the union dead. Four months later, re-interment began, with the cemetery dedicated on November 19, 1863 (Know that date?). We started out near where Lincoln delivered the Gettysburg address (Hal and I recited it from memory—why don’t kids have to memorize today?) The kids got caught up in the search for monuments from the various states, regiments and companies, and we all were sobered by the vast number of small white marble grave stones marked “unknown.”

There are many more things to see in Gettysburg—the train station where Lincoln arrived, the David Wills house, where he stayed the night before delivering the enduring 272-word speech (that followed a largely forgotten two-hour keynote address by politician and orator Edward Everett) and the Eisenhower National Historic Site, the farm where Ike and Mamie lived until his death in 1969, for starters. But we had had just enough (and we had two more grandchildren turning 12 and 14 soon, so we’ll have another chance.)

We headed home with a record one souvenir per kid, and got a nice surprise a few days later—thank you notes!

Sporting News: You're the Worst Ever!