The good thing about having the biggest and most beautiful house in the neighborhood, maybe even in Mt. Lebanon, is that you can entertain a lot.

The good thing about having the biggest and most beautiful house in the neighborhood, maybe even in Mt. Lebanon, is that you can entertain a lot. The bad thing is that most of the people who enjoy your hospitality may be afraid to return the invitation because their own houses just don’t measure up. It could get lonely at the top… if you didn’t have the warmth and charm of Neill Stouffer and Bruce Harshman, owners for the past seven months of a massive 1931 stone Tudor on Washington Road.

The married couple is so nice, you just know they’d look beyond your own smaller, shabbier, less creatively decorated-but-still-beloved home and be interested in meeting you and their other new neighbors in Mt. Lebanon, a community of which Stouffer, owner of Neill C. Stouffer Fine Interiors, says, “I feel like I’m home now.

“There’s a different energy here than in the city,” he continues. By “city,” he means Pittsburgh’s North Side, where they renovated an 8,000-square-foot signature brick home on North Avenue that was featured on the Mexican War Streets House and Garden Tour. The house was one of several that Stouffer and Harshman, who owns Salon La Te Da on Castle Shannon Boulevard, renovated together. It sold in only eight days, freeing the couple up to focus on what Stouffer calls their “$500,000” fixer upper. “We’ve already spent three times what we anticipated,” Stouffer says, “Just the electrical work cost as much as a nice new car.” Believe it or not, he grins when he says that. 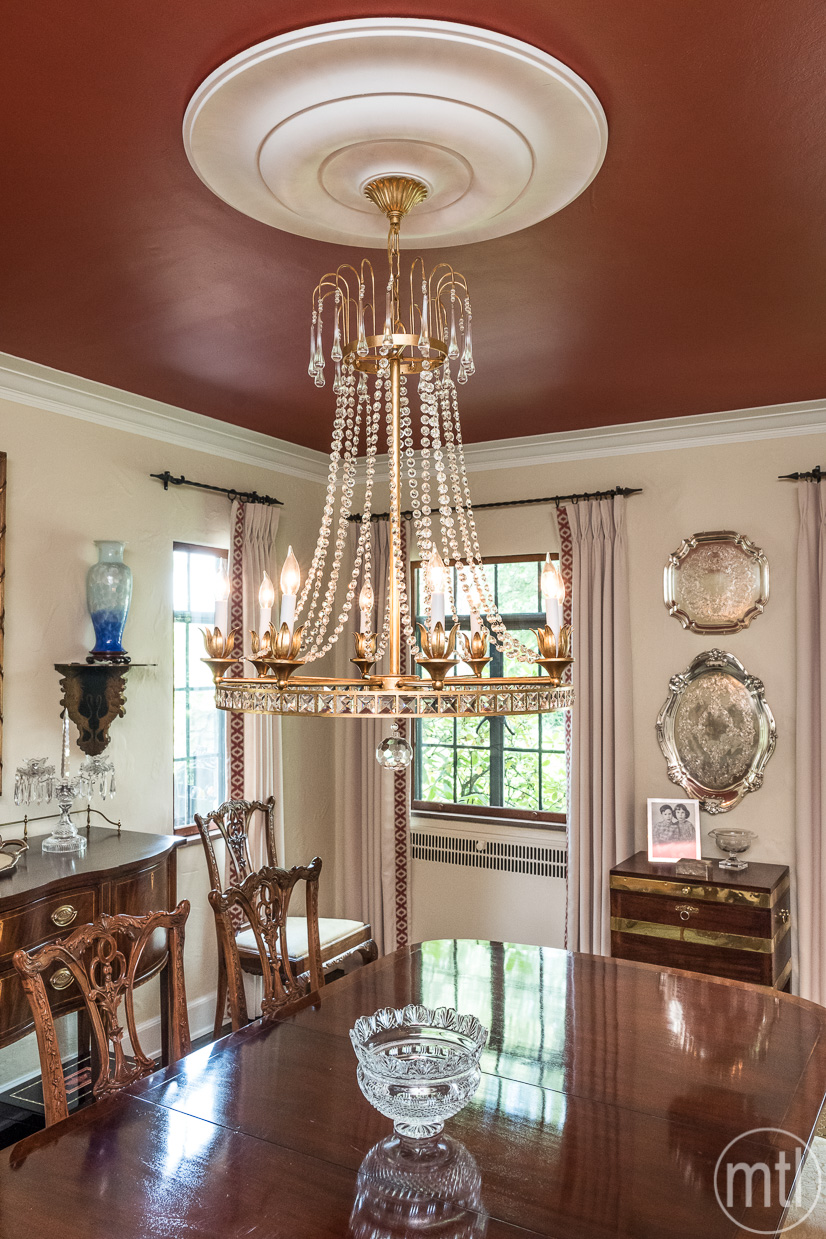 The unanticipated expenses mean they have put a few projects, such as a sprinkler system and a new driveway, on hold till next year. Still, what they have accomplished in a matter of months with the help of a crew of trusted craftsmen and contractors is astounding. “When I saw this house, I said, ‘This is my dream home. It’s a diamond in the rough,’” says Stouffer. “No, Harshman corrects him gently, “You probably said, ‘This is our dream home.” “No, I probably said, ‘my,’ parries Stouffer. It’s clear from their repartee and from what they’ve accomplished in less than a year that they agree or at least make easy compromises on just about everything.

Built in 1931, the house has been well used and loved by several families. Stouffer and Harshman purchased it from the widow of a prominent lawyer. She and her husband raised three children there, and enjoyed the location and space the house provided. But they were more inclined to spend their time working, reading, volunteering or enjoying sports than decorating or entertaining. So, Stouffer and Harshman purchased what you might call an empty canvas. The house needed major updating and TLC, but with its great bones, spacious rooms and historic architectural details, it was the perfect choice for Stouffer, who has the talent and professional connections to polish a tarnished gem, and Harshman, who has a keen interest in history and genealogy (he’s the ninth generation grandson of Benjamin Franklin, his husband says proudly).

Harshman has served as a director of several historical societies. “We consider ourselves caretakers,” not owners, of the houses they have lived in, says Harshman, reflecting his respect both for the past and the future.

The couple’s goal was to create a beautiful, comfortable modern living space while preserving, restoring, or in some cases, replacing, the significant historic features. Many people who looked at the house might have shared that goal, but according to their real estate agent, most were daunted by the magnitude of the space and the task. For Stouffer and Harshman, who were “downsizing” to 5,000 square feet and had faced remodeling challenges before, it seemed do-able. Still, in refurbishing (and repurposing) the main living area, seven bedrooms and 4 ½ baths, as well as completely gutting and redoing the kitchen and family room, “I think we faced every obstacle you could think of,” Stouffer says.

Set far back from the highway and with lush landscaping that muffles the traffic noise, once you enter, the house feels like an elegant English country estate. To the right of the spacious center hall is a living room that once seemed cavernous because of the furniture scale and placement but now feels cozy, with large, comfortable upholstered pieces facing the commanding original fireplace and mantel. The room is a personal statement, filled with original art; several collections, including porcelain boxes, many of which belonged to Harshman’s mother; a Steinway grand for Harshman, an accomplished pianist and a spectacular Venetian glass chandelier, one of only three of its kind in the world. 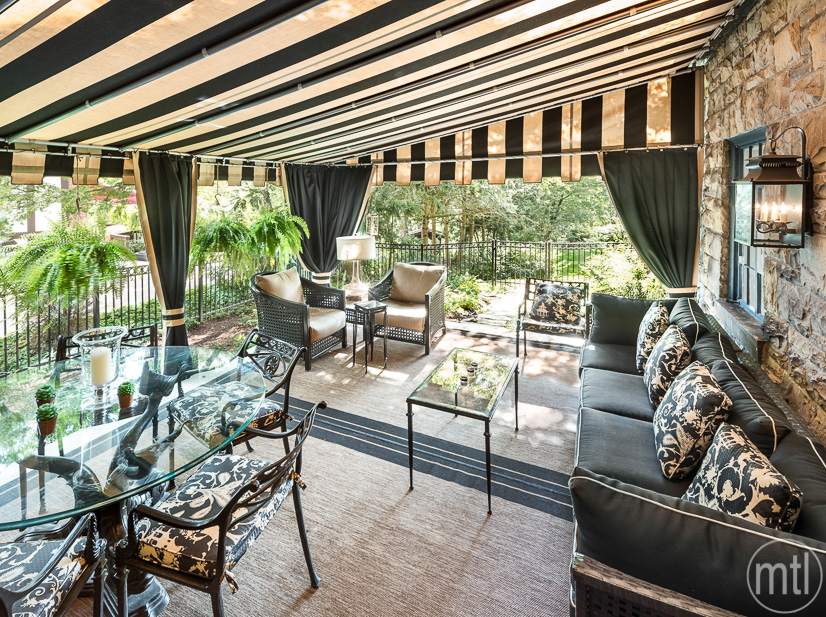 A door in the living room leads to a spacious back porch sheltered by a green-and-white striped awning and surrounded by a garden maintained by Harshman—a perfect summer gathering space that had not often been used by the previous owners, perhaps because they summered at Chautauqua. On the opposite side of the house is the dining room, featuring Chippendale furniture, antique silver on the sideboard and yet another showpiece crystal chandelier.

Off the dining room, with the help of designer Laura Reid Riggin of Woodville House, the wall between the breakfast room and the tiny, unremarkable kitchen originally intended only for a maid was removed, creating a large modern workspace and eat-in kitchen with white Plato cabinetry, Cambria quartz countertops, a porcelain floor that imitates marble and stainless steel appliances. Custom cabinetry with glass doors atop and drawers below, as well as built-in storage benches around the breakfast table, provide plenty of space for safe-keeping a surfeit of exquisite china, silver and crystal. “We use it all,” Stouffer says. 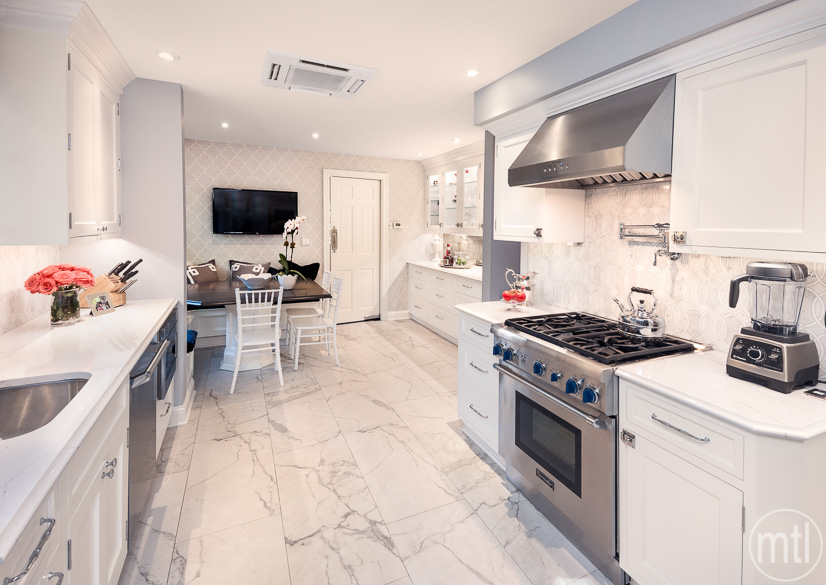 Across from the kitchen, what was once a kids’ playroom and later a place for teens to crash has become a sitting room, more contemporary than the formal living and dining rooms. “We wanted it to be transitional,” Stouffer says.

Every lighting fixture in the house has been replaced save one, which was relocated, along with much of the door and drawer hardware. The walls have all been painted in soft Farrow and Ball colors; the wool carpets—in modern textures and patterns by Stark—are a welcome change from the anticipated Orientals, and the plantation blinds and understated-but-still-dramatic window treatments brighten what might have been a dark house. Among the historic features they saved and enhanced: the original casement windows with transoms—the first windows ever made by Pella, Stouffer says— the parquet floors, the many wrought iron gates and railings, all embellished with a swan, the pulled plaster moldings and the original bathrooms, featuring typical 1930s yellow, violet and blue tile in virtually perfect condition (the fixtures have been either replaced or glazed). A narrow back servants’ stairway was reopened and refurbished—they say they use it all the time. 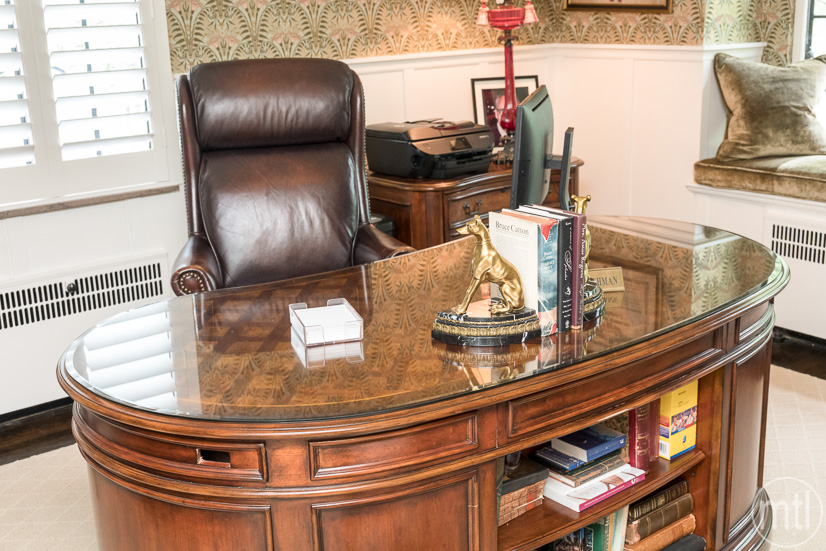 Upstairs, one of the five bedrooms is now Harshman’s office, a man space of his own design featuring a large oval desk, a leather chair, framed family memorabilia and wallpaper discovered on a trip to Bedford Springs. Stouffer kept hands off. Three of the other bedrooms have become a master suite, with the largest bedroom leading to a nursery-turned-dressing room with a marble topped center storage island, leading to a middle-sized bedroom-turned sitting room. “I wanted a Ritz-Carlton or Four Seasons bedroom,” says Stouffer, alluding to the pale, relaxing colors that tie the three rooms together. There also is a guest room on the second floor and two more in the “attic” that once served as a maid’s living space. A door from one of these guest rooms leads to a narrow 28-foot, carpeted storage closet—a necessity because of a quirk of the house: it has no basement. The lack of a basement, in fact, accounts for the large closets everywhere—an anomaly in a 1930s Mt. Lebanon house. 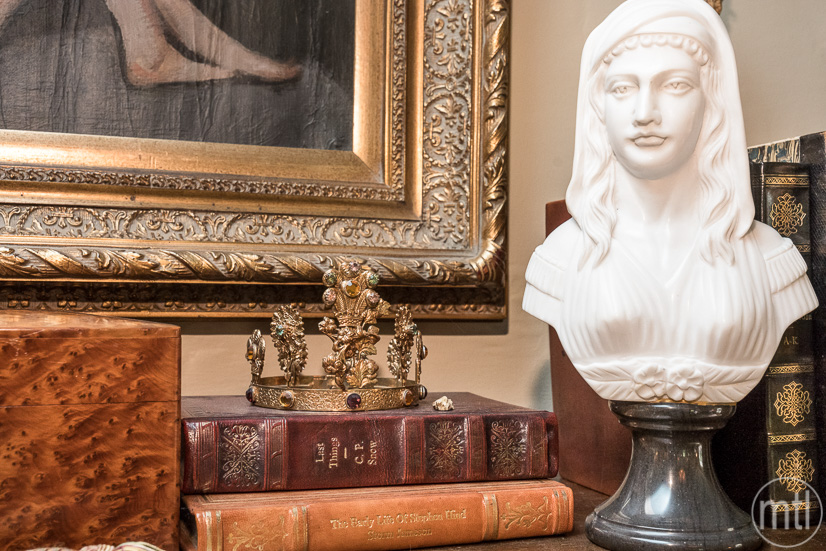 Throughout the house, precious antique furniture lives compatibly with pieces from the Althorp collection, fine reproductions of furniture from the childhood home of Princess Diana (only a pro would know the difference, and they cost more than many antiques!). Also mixed and mingled throughout are antique and modern art, including 18th and 19th century paintings, family portraits and contemporary works they “just like.” A special interest is Western Pennsylvania art, and they are proud to have an oil painting by A. Bryan Wall (Pittsburgh 1861-1935), who was known for his pastoral paintings—sheep in this case—as well as a painting titled “Scene in Maine, Evening,” by Scalp Level painter George Hetzel (born in France, Pittsburgh 1828-1899), which came from the Hetzel estate. An eye-stopper in the bedroom is a framed Hermés scarf that belonged to Stouffer’s late mother. “She had drawers of them, and my sister is not a scarf person,” he explains.

Although the project has had its frustrations, such as a shoring up a collapsing ceiling (“There are 185 washers holding up that ceiling,” Stouffer says), they continue to be delighted by the surprises their old house has presented—the original boiler, which continues to work perfectly; built-in speakers from 1931 that had been plastered over and still work; a heated integral garage; a broom closet perfect for a second-floor laundry room. There are no regrets here.

It’s a perfect location for the pair, whose businesses are both located in Mt. Lebanon. “This house was speaking to me,” says Stouffer.

Harshman doesn’t correct him this time, but it seems clear Stouffer means, “This house was speaking to us.” Maybe.

Take a Risk, for Goodness Sake!