If you were born in America and are reading this, you probably were delivered in a hospital, as most babies are in the United States.

If you were born in America and are reading this, you probably were delivered in a hospital, as most babies are in the United States. But if you were born in another industrialized country—the United Kingdom, Japan or Sweden, for instance, or if you had been born earlier in American history—you might have been delivered at home by a lay midwife.

In colonial times, many midwives brought their skills from England; other midwives came from West Africa as slaves and still others followed Native American skills of midwifery, points out Judith P. Rooks, author of Midwifery and Childbirth in America. Skilled as these women may have been, there was no standard regulation for midwifery; midwifery declined in America as more women gained access to hospitals and obstetricians.

But good things such as the personalized, empathetic care midwives traditionally provided have come round. In recent decades, nurse midwifery has become an increasingly popular medical specialty. More and more nurses are taking the advanced courses required to become certified nurse midwives, and more and more women are choosing midwives for prenatal, birthing and lifetime gynecological care.

In Pittsburgh, the 35-year-old Midwife Center for Birth and Women’s Health, accredited since 2003, is the oldest free-standing midwife center in the country and the only one in western Pennsylvania. With a new building that opened this year at 2825 Penn Avenue in Pittsburgh’s Strip District, it is a shining example of modern midwifery. The highly trained staff provides care to women of all ages from contraception to the annual gyny exam to pregnancy and birth through menopause. Women can have their babies at the center (and likely go home the same day) or receive prenatal care at the center and deliver at a hospital by choice or if needed. Each midwife is associated with an obstetrician.

So, what can a woman expect from the midwife center? A main tenet of midwifery is that birth is a normal, life-changing process that needs no intervention without evidence of a problem. At the center, care is family focused—Dad, the kids and the grandparents can all be there for the birth of a baby, if that’s what Mom wants—and women are active participants in their own care. Most of the women go home within four to 12 hours after their baby’s birth, knowing that one of the center’s five nurses will come to visit them for the next couple of days.

Appointments with one of the center’s 10 midwives and providers (two speak Spanish) for a prenatal checkup or an annual gynecological exam are personal and leisurely, with plenty of time for questions. “Midwifery is a science and an art,” says nurse practitioner Dana Bloomburg of Mt. Lebanon, suggesting good people skills go hand in hand with the ability to diagnose and prescribe. Bloomburg is not a midwife; she provides annual wellness checkups and sees to women’s gynecological needs beyond pregnancy.

“I have a friend who said, ‘I want an appointment where I can get in and out,’” and I told her, ‘Then, you don’t want to come to the Midwife Center,’” says Bloomburg. Her office, is decorated with comfy furniture that nearly disguises the accessible examination table. “I try to make it a home away from home,” says Bloomburg, who has a bachelor’s in nursing from Pitt, a master’s from Carlow and was a labor and delivery nurse at Magee Hospital before joining the center in 2009. Her son, Preston, 4 1/2, was born at Mercy Hospital, delivered by an obstetrician with a midwife in attendance. Son, Graham, 1 1/2, was born at the center.

A former president of the Mt. Lebanon Junior Women’s Club, Bloomburg, who lives on Shadowlawn Avenue with her husband, Steve, and the kids, gets frequent questions about the center from friends. Though she loves her work and had a good personal experience there, she does not “push” people. “Everyone should pick the right health care provider for themselves,” she says. “You need to trust your provider and have a good relationship.”

A visit to the center might be all it takes to sway someone. A huge colorful mural of a pregnant woman on the side of the center’s old building (to be remodeled), which abuts the new building, presented a challenge for Architect Dan Rothschild, Sunnyhill Drive, a principal of Rothschild Doyno Collaborative, located just a few doors away, and his colleague Brenna Schaffer, the project architect.

“As neighbors, we were well aware of the beautiful mural,” says Rothschild. “We had to figure out a way to celebrate the mural, not cover it up.” Their solution was to connect the two buildings with a glass bridge, setting it back far enough so the entire woman is now visible not only to people entering through the small public park that the setback created but also from every floor of the new building. 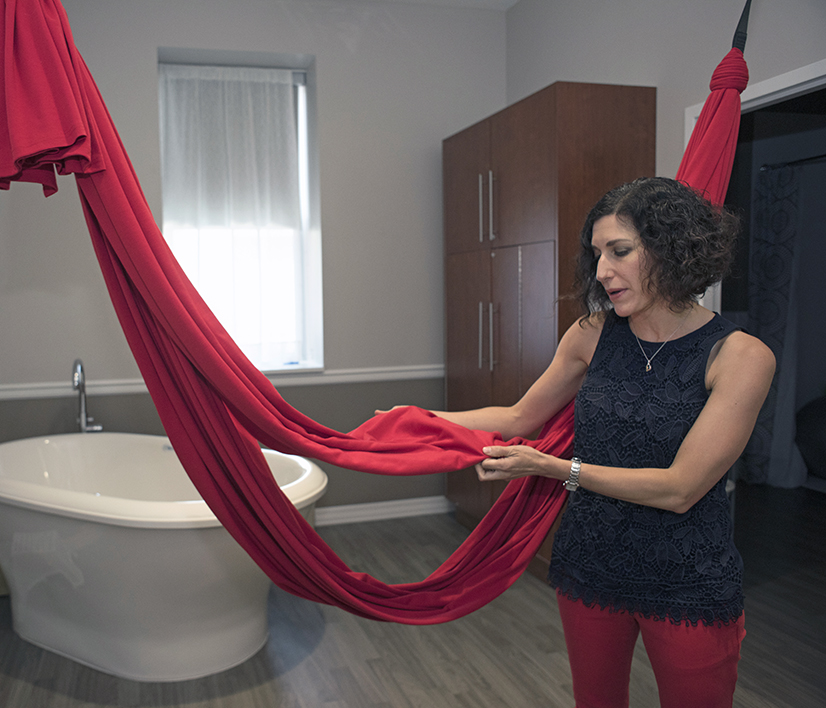 Inside the center, the birthing rooms are cheerfully decorated bedrooms with softly painted walls and printed comforters. Women in labor wear their own clothes—a bikini bathing suit top, a T-shirt, whatever. In the rooms, they can move around while in labor or even relax (and give birth, if they wish) in a soothing soaking tub. In one room, they can take pressure off their feet and backs by hanging over a red “birthing swing” and gently rocking. Most of the women want to experience a natural delivery, but if the pain becomes overwhelming, the drug of choice is nitrous oxide (yep, that’s laughing gas!).

The nonprofit center’s board vice president, Lisa Stauffer, Navahoe Drive, and her husband, Thad, experienced some pregnancy challenges. “I wasn’t getting the individualized treatment I needed—I kind of needed someone to be sympathetic,” she says. A friend suggested she look into the Midwife Center. A talk there with clinical director Anne McCarthy about fertility, family history and emotional issues convinced the couple that they were in a family friendly place that would work for them. Eighteen months later when Lisa became pregnant, she had her prenatal care at the center but because of concern over complications, her daughter Lucy, 9, and later, son Toby, 7, were born at a hospital with a midwife in attendance.

Stauffer has served three terms on the TMC board and has chaired its major fundraiser, “Let Them Eat Cake,” at Pittsburgh Opera in the Strip District. She joined the board because she wanted to continue her involvement after she no longer needed pregnancy service, and she is committed to its mission to serve women from their teen years to the other side of menopause. She is not alone in wanting to give back to a place that has nurtured her. “Many board members have a personal connection to the center and are deeply passionate about the work,” she says.

Christina Haas, who has a degree in sociology and is the director of the center, handling its administrative needs, says the center accepts most insurance and notes that its costs are lower because midwives do not perform surgery. She says that the center’s rate of premature birth is lower than Allegheny County’s or the national average and confirms that centers such as theirs help keep the rate of C-sections down.

Like Bloomburg, Rachael Bieltz, Inglewood Drive, who has a master’s in public health, had Jonah, 7, at a hospital, delivered by a family medicine practitioner who was supportive of low intervention. Partly because of that good experience, she became a certified Lamaze instructor. Now, in addition to working in public health research at Pitt, she has a private Lamaze practice, teaches at hospitals and gets referrals from the Midwife Center, which requires all its clients to take a childbirth class. Her class focuses on six practices that contribute to a safer, healthier birth. “The focus is on moving around, changing positions, giving birth in an upright position instead of on your back and avoiding interventions that are medically unnecessary,” Bieltz says

Bieltz’s daughter, Mira, 4, was born at the Midwife Center in the middle of the night after a short labor. Bieltz was home by lunchtime, able to spend the baby’s first day with her son and husband, knowing a nurse would visit for the next two days. Nitrous oxide wasn’t available for pain at the center when she delivered, but she wishes it had been. “It’s such a wonderful option because it is in and out of your system so quickly—good for someone like me who did not want an epidural.”

Her husband, Dave Delmonaco, wasn’t comfortable initially with midwifery, she says, but he gained confidence as he participated.“It’s such a wonderful, supportive environment. Your appointments are not rushed—you can ask all the questions you want,” Bieltz says. “I loved my birth there; it was extremely relaxing. My husband and I got there, and I immediately got into the tub and labored in and out. The midwife would come in and help me get comfortable, pour water down my back. And one of the nice things is that the beds are all doubles, so after you have your baby, you and your partner can cuddle (the baby) in the same bed.”